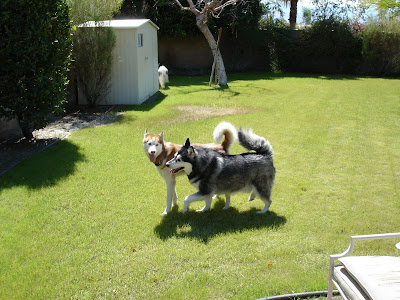 We did not co-operate with the flashy beast this trip so this is about the only picture Dad got of us.  If you look in the upper left hand corner next to the shed you can see Remy's tail and pantaloons.  He is looking for a cat who is not his friend.

When Remy was 9 months old (before I came into their lives) Dad brought him out for a visit at Christmas. Remy was let loose in the yard, found a trespassing cat within 30 seconds of being off his leash and had it in his jaws.  Dad was able to chase down Remy, tackle him and pry his jaws open and release the cat.  Dad was all scratched up from the cat and Remy even bit him. Unfortunatly their are no pictures or any other evidence other than Dads scars.  I am sorry I missed that, I am not sure if I would have helped Remy or Dad.

After the cat escaped Remy's Jaws of Death it immediatly ran behind the shed until they could get Remy inside the house; the cat finally came out from behind the shed with some gentle poking with a rake ....handle by Whiskey's Dad, (the cat was given some time to calm down before the poking started).  The cat was fine and ran away as fast as it could get out of the Grandparents yard.  The Grandparents reported seeing the cat many times after this episode in the neighborhood acting normally for a cat (whatever that is) but never again trespassing in their back yard.

Flash
Posted by Sychoberians at 4:00 PM

Scary! We hope everyone was OK!
Tail wags,
Storms

Woooos! Mum says I must feel sorry fur the kitty, but secretly I am going, he, he, he, evil cat fur trespassing!
~husky kisses~
-Kira The BeaWootiful

I bet that cat will never forget! :)

I bet that was fun!!! We like chasing critters of all kinds. It's in our nature!